New Items and Features for DUG

Following our previous updates that focused on survival and our take on fishing; We have finalized elements of the second part of our survival update, added new items to the combat experience and even reintroduced items from the 0.62 Build of DayZ. DUG Server Mod Update #10 brings new aspects of PvE and PvP.

When it comes to fighting wolves it can be quite difficult for Survivors if they are not properly prepared or few in numbers, so we have decided that you should be rewarded (albeit with more work) with the option to create Wearable Clothing from the Pelt and Head of wolves. After skinning a Wolf you will receive two items: Skinned Wolf Head and Wolf Pelt.

These items will allow you to craft the Wolf Headdress and Wolf Bushrag.

Due to the fact the Grey and White variants can only be obtained by killing the correct Wolf, you have the option of spraypainting any variant of the already crafted Wolf clothing with either Black or Green Spraypaint.

Thank you Valdark for the creation of these new items!

The Wolf Headdress and Wolf Bushrag Come in 4 Variants

Want to bring attention to yourself within a set area with little cost to yourself? Well this new item might just be the thing for you: Introducing the Whistle!

This small item can be used to alert any living and/or hostile being within ~300 meters. Great for trying to regroup with friends or gathering up a horde of infected. We’re excited to see how survivors use this to their advantage.

The Whistle has different possible sounds when used, ranging from “strong and audible” to “very dry”, so hopefully your interaction or ambush isn’t tainted by a bad blow!

The “Less Than Lethal” Option

Our community members have been longing for more forms of stopping survivors without just having to kill them or hold them up. Sometimes you just want to be able to just knock them unconscious, so we are now introducing new methods for putting someone down (without the 6-feet under part)!

Each new ammo variant comes with custom textures for its round as well as the box it comes in.

Lochten supplied Chernarus and other countries with “Less Than Lethal” forms of ammunition for both Law Enforcement and Home Defense, quickly becoming one of the leading manufacturers. They were to be heavily used to help in the containment of the outbreak before the military declared that lethal force was necessary, as a result a stockpile of rubber rounds has been left to sit and gather dust throughout the country, waiting to be used… 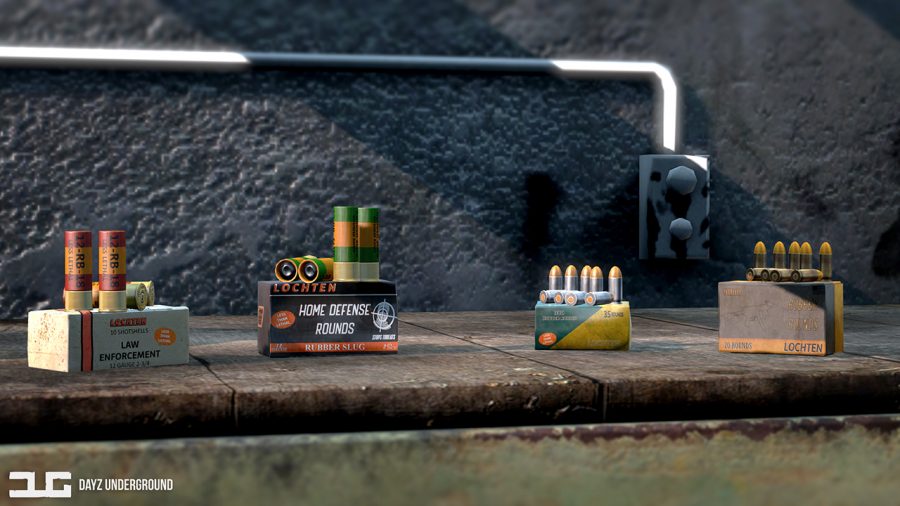 This type of ammunition is primarily designed to deliver a stinging blow that incapacitates but does not kill or penetrate flesh. However, these can still be lethal if aimed at certain parts of the body or used on a target more than intended by the manufacturer.

Used by local Law Enforcement, the X-2 Defender was one of the main tools used by Officers as a form of subduing suspects that were resisting authority. The Taser has a powerful electric shock that causes anyone that is hit by one of its projectile barbs to fall unconscious quickly afterwards. As a result of this high-power electric shock, the Taser’s range cannot exceed 5 meters, forcing the user to either wait or approach the target for a close quarters encounter. Each Taser Cartridge has 2 rounds that can be fired in rapid succession.

Seeing as these new items will more than likely change PvP, we will need to hear your feedback on these additions so we can continue to balance them for our hardcore environment. Please leave us feedback by joining our Discord and use the #hc-survival-feedback channel. Thank you Not A Banana for helping us get the Taser working!

The DayzUnderground Weapon Variants Pack adds new variants of existing weapons through retextures. Like many of our new clothing items, we use custom materials as well as custom RVMats to achieve full blown material changes. This allows us to fully simulate the surface of different materials such as wood and polymer. As always, we try to pay lots of attention to authentic details in order to deliver the best quality possible.

These new materials will have a real impact as the polymer variants will actually be more lightweight than their wooden counterparts.

As we continue to work with Windstride to get more of his items to the community we have decided upon adding these items while also giving some of them a DUG twist:

Thank you Iris for creating these new variants!

Returning Items and Features from 0.62

Our community members haven’t just been longing for more ways to uncon other survivors, they have also been wanting key features that were prominent in 0.62, but are no longer working or have yet to been fixed as DayZ moved onto its 1.0 release. We have decided to step up to the plate and do what we can to bring some of those features back into a playable state. We hope you enjoy these items long awaited return!

We have recently reintroduced to the Tripwire Trap to DUG, which can be crafted using sticks and metal wire. For it to properly work you’ll need to be sure to attach the item you want to the tripwire trap’s attachment slot to activate said attachment once the trap is triggered. Attachable items allowed are:

Tripwire Traps can only be placed on Dirt or Sand type surfaces. Tripwires also cannot be disarmed. You’ll either have to find a way around or attempt to jump over them.

For those already aware we have brought back Spraypaint in a small form already, mainly to be used to create different variants for the Ghillie Suit and its counterparts. We are now happy to also introduce the re-implementation of Spraypainting almost all items that you could back in 0.62!

Please note that combining spraypainted items with a different Spray Color will not create a Camouflage Pattern at this time.

Join the DayzUnderground Discord and stay updated on all mod changes and other important info as soon as they go live. You can find a detailed changelog of the DUG mod on our Steam Workshop page as well.