The 12th DayzUnderground territory and points of interests map 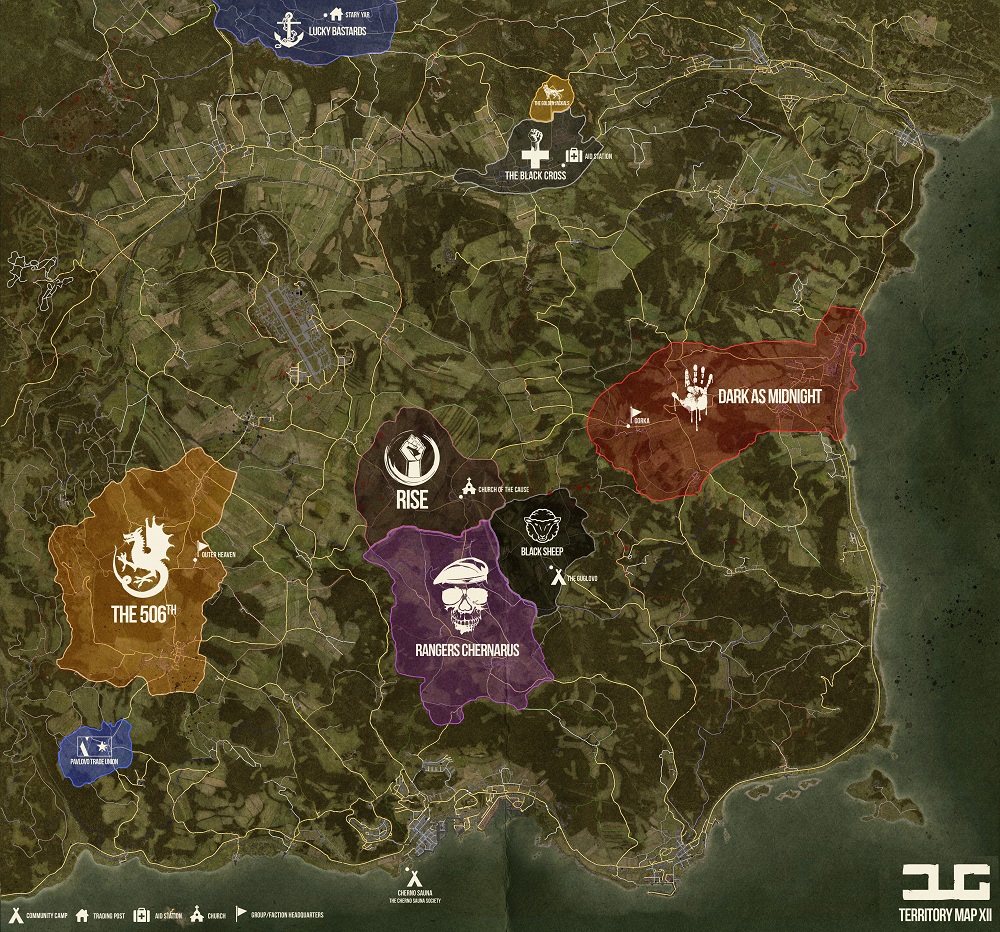 Some of our varied groups and groups that met the faction requirements to be recognized as official DUG factions, claim territories and have built points of interests for other survivors. Here is the current map that will guide you across the server. Many more factions and groups currently don’t claim territory and while active in-game, are not featured on the map.

Please keep in mind that all of these territories and groups represent real people, there are no NPCs. You will probably not always find everyone just as you pass by or find that a POI was torn down. These territories often just show you where these groups are based out of or have ties with through their stories and lore.

RISE – A chaotic evil faction that believes in true, unrestricted freedom and a faith known as “The Cause”.

The Lucky Bastards – A lawful/true neutral faction consisting of a former freight carrier crew looking to survive in the Chernarussian wilderness, staying loyal to those who deserve it, but fearlessly hunt those who threaten them.

The 506th – A chaotic good faction that has created the Western Free State and punishes those who would bring evil to their home.

Dark As Midnight – A chaotic evil apocalyptic faction focused on keeping what’s left of the world in anarchy and doing whatever necessary to protect their haven of Gorka and the surrounding area.

The Black Sheep – A friendly group that helps passerbys in Guglovo and defends their town against aggressors.

The Rangers Chernarus – A neutral evil group of bandits based out of Zub Castle, driven by greed and attaining all they desire.

The Black Cross – A neutral group whose goal is to provide aid to those who need it regardless of affiliation as well as to end oppression.

The Pavlovo Trade Union – A neutral trading faction focused on the exchange of supplies and loot with almost all groups, factions, and survivors.

DUG’s players are diverse and have different playstyles – everything from roleplay to bandits, traders or just survivors.

The map making process and how to be on it

Every two months, a few community members come together to create a new territory map that shows the home turfs and points of interests of some of our groups and factions.

The process is quite simple, a thread is posted in our private member forum and any groups or collectives can claim territory or share their points of interest. The map team then votes on those claims based on requirements such as the amount of group members, their ingame and forum activity and what they add to the community and other players.

Do you want to see your group or point of interest featured on the map? Show us something unique, get involved with other players and join the community if you haven’t yet!

We also want to thank everyone involved in this community created map as well as every player who is on it and adds more unique aspects to DUG!